Now playable in browsers due to the tremendous effort of the MZX development team over many years, but on this score especially recently. One of whom also shouted out the emscripten dev team as needing a similar shout-out.

* If player frame loses focus/control, click on it to regain focus.

X is also used to struggle against an enemy/trap that has a hold of you. More complicated attack inputs than "X" are explained in game.

Your high score is stored locally, but I'd love to hear about it!

Originally released in 2010 with the TurboSilver edition in 2011, this game was met with the following reactions from my fellow MegaZeuxers: "Very good" and "Too Hard", which I think sum it up well.

It got some good reactions outside the MZX scene, too including this from Porpentine on Rock, Paper, Shotgun: "a well-oiled dungeon death machine ... a fast-paced, full-featured platforming dungeon run, another fun little world full of gems and death." And this, from auntie pixelante (article out-of-print): "ruin diver III [...] is one of the most developed games i’ve ever played. it has a small cast of characters, but each of those characters interacts in ways i’m still discovering. the fact that the average game lasts only seconds – surviving a minute was a major achievement for me – just makes the experience feel that much more dense, more distilled."

If you want to "tip" me when downloading, you can, but this game has always been and will always be free as long as I can find a place to host it. 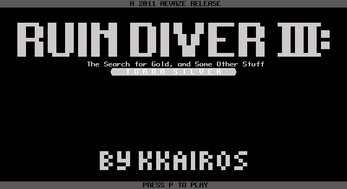 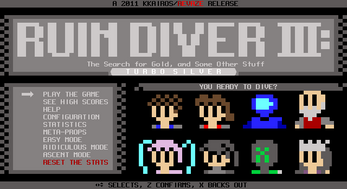 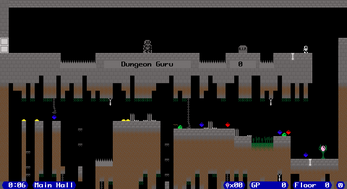